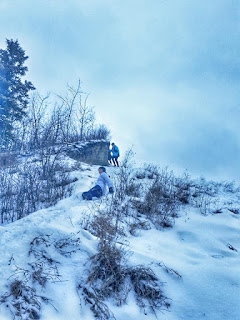 Signing up  Some 20 or so months ago, still contemplating a possible move from Maryland to Edmonton, I was googling ultras in Alberta (of course) and came across a disturbing photo. There, on the home page of a twice-annual event called the River Valley Revenge, was the photo of a runner, his face and beard frosted over, perched precariously on a narrow trail above a frozen river.   It looked horrifying .    I also knew if we made the move, I'd be signing up someday. After semi-hibernating my way through our first Edmonton winter, and having run (or attempted to run) the summer edition of RVR, I at last felt ready, ready-ish, to sign up for the 50K this past January.  Orientation For anyone new to this race and the Edmonton river valley, I can't emphasize enough the value of the Orientation Clinics put on by race organizers Todd and Sheryl Savard.    For me, the Orientation I attended two weeks before the race was a wake-up call. Before coming to Edmonton, my idea
Post a Comment
Read more 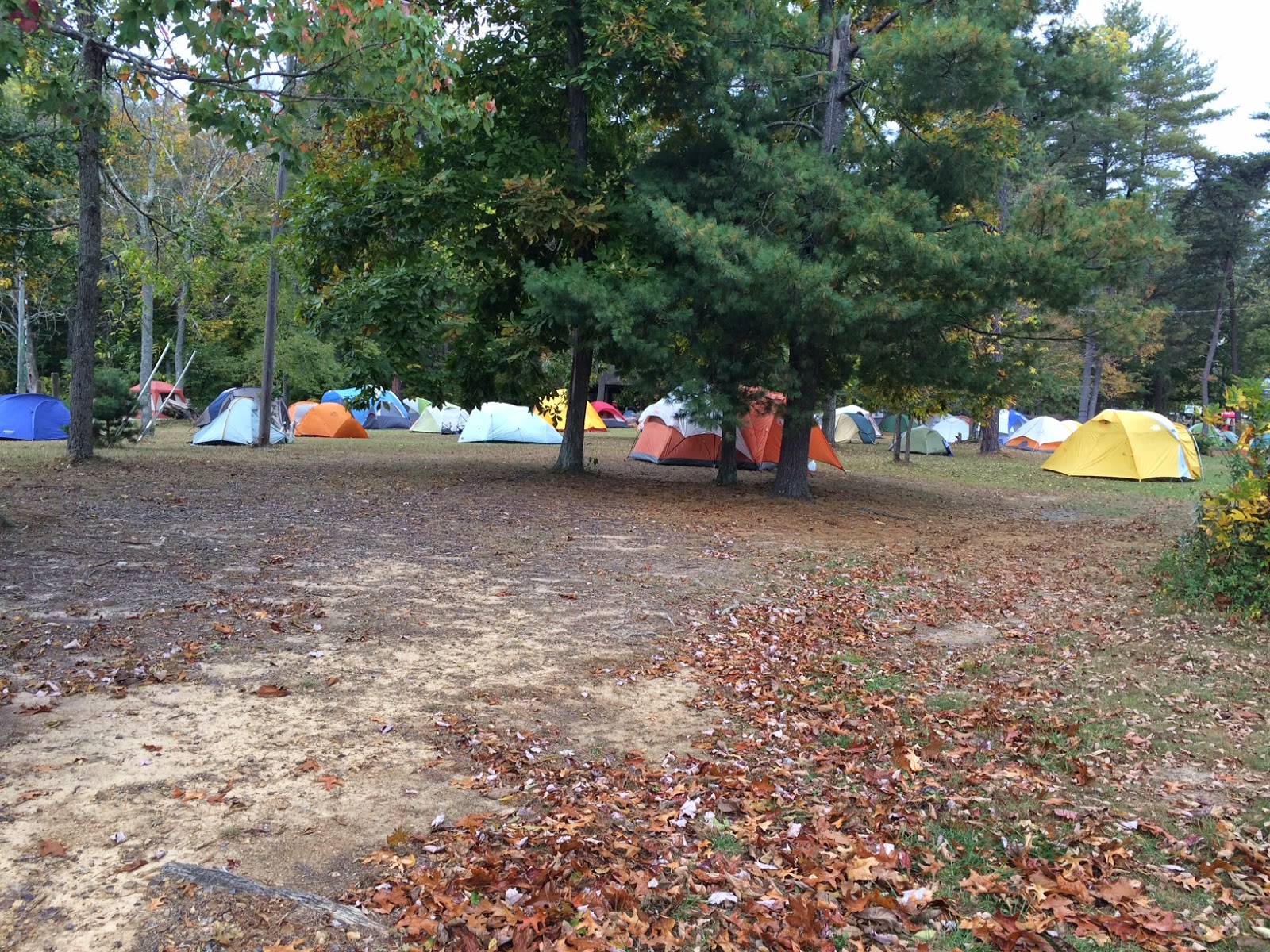 The 2014 Grindstone 100 was the nearest I've come to dropping out of an ultra.  This was my second Grindstone finish, a good deal slower than the first--technically speaking a really bad race, but by far and way my most satisfying ultra.   By the end, I was relieved, grateful and more than a bit astonished to have finished at all. Over the edge With a 6 PM start time, the first 12 hours of Grindstone are run in darkness.  This year added a few soaking showers and some fog on the high ridges.   The darkness was appallingly total.   There were no views of stars or the moon this year.  If you turned your headlamp off, you could not see your own hand held in front of your face.    It's an experience we never get in the suburbs of DC: real night, inky black and everywhere.   The conditions weren't so bad for running though, the rain no more than an occasional bother requiring a little more care on the technical terrain.   And for the first 20 or so, up over El
1 comment
Read more

A little over a month from now, I'll be joining 300 souls at the start line of the " Grindstone 100 . " Doing it once back in 2012 was slightly daring, well out of my comfort zone.   A second time is merely daft. Two years ago, many of you helped to redeem this ill-advised undertaking by generously pledging a donation to  Fundación Prótesis Para la Vida .   I am asking for your help again this year. Online pledge form here The Cause for which I'm running I consider mobility as more than a human need--it is, or ought to be, a right.  Yet poverty prevents many people from obtaining the prosthetics they need.  One of the organizations founded to help those who could not otherwise afford mobility is Fundación Prótesis Para la Vida (Prosthetics for Life), based in Ecuador.  Some of their patients (not the very young ones pictured here, obviously) have waited decades for a prosthetic limb. Prótesis para la Vida is a very small organization, with bare-bones admin
Post a Comment
Read more 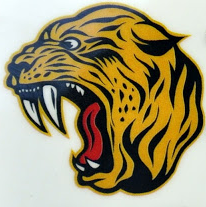 John Steinbeck said of trips that we don't take them so much as they take us.   Every trip, every journey is its own character, a distinct personality with its own its own wants and its own agenda--"and all plans, safeguards, policing, and coercion are fruitless." I already knew from two previous finishes that Maryland's Catoctin 50K is an ornery character, a diabolically rock-littered roller-coaster of an ultramarathon--held, just for good measure, in the soggy heat of late July.   It doesn't even respect the 50K distance, growing a bit each year through erosion and trail changes to its current 33-point-something length. This time I would also learn that the Cat is entirely unimpressed by any "experience" I might have gained in two previous finishes.   Or with my careful planning and strategizing.   Cats have their own prerogatives and don't care about yours. Old stones The race starts where it ends, at Gambrill Park in front a
Post a Comment
Read more

Lost in the Graveyard: Race Report on the 2014 Graveyard 100

Road to Hatteras Roiling surf the Friday before race day seemed to auger a repeat of last year's event.   In the 2013, second annual, running of the Graveyard 100, coastal flooding forced a reroute, turning runners back just at the threshhold of Hatteras for a return trip to Corolla. Conditions seemed worse this year.  Steady winds pushed a lashing cold rain in from the north and east.   Little hurricanos formed in random gusts.  The thought of running in this was appalling.  I struggled just to walk from my car to the hotel lobby. But weather reports assured us Saturday would be different.  Race director Brandon Wilson sounded confident at the 3PM briefing (one of two provided on Friday), giving us a 95% chance of safe crossing into Hatteras.   I had run the out-and-back alternate before and felt comfortable with either outcome. I was intensely curious to cross the bridge into Hatteras and I fell asleep that night hoping I'd have a chance to experience the "t
2 comments
Read more

Coyote kill on the C&O towpath?

Early one recent Sunday morning,  I pulled into Riley's Lock, my usual start for long runs on the C&O towpath.   There were no other cars in the normally busy lot, which didn't surprise me.  It was still early, the sun just up, and with the so-called "polar vortex" settling in over our mid-Atlantic world, the temperature remained stuck in the single digits.    I headed north.  There were several inches of almost fresh snow covering the path. Mine were the only human tracks among the overnight skitterings of animals. As I ran, the sun flashed through the bare trees and across the ice and the snow.   Thirty minutes in, I was warming up more quickly than expected and felt loose-limbed and relaxed.  I even stripped off a layer or two. I felt a little frisson of excitement.  Putting words to a wordless sensation, it was the pleasure of a felt contrast between the icy woods around me and the warmth I was generating within--like sidling up to a campfire on a
4 comments
Location: Rachel Carson Greenway Trail, Silver Spring, MD, USA
Read more 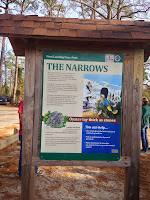 Some eight hours or so after solstice--the sun's southern turnaround in its annual race--I joined about 300 other runners for the start of the 5th Annual Seashore Nature Trail 50K.  Imitating the celestial seesaw, we would be looping back to this spot twice more, ending where we began, in a parking lot in the southern end of First Landing State Park, a beautiful maritime forest on the headlands of Cape Henry. By chance, this year's race fell squarely on the first official day of winter.  You wouldn't know it from the conditions though.  Another lesson in the folly of consulting extended weather forecasts before race day: what had been projected as a cold pelting rain 10 days out had by 5 days prior fizzled to a warmish drizzle, then, with a day to go, had morphed into a prediction of mostly clear skies and Florida-like warmth. The sensation of having traveled south was enhanced by hanging Spanish moss, glimpses of open water, sand, and the odd subtropical plant.  By th
Post a Comment
Read more
More posts